At Tuesday, 27 September , in Dom Omladine (Belgrade, Serbia), it was held a duscussion „Violence against animals“, the first in a series of lectures named “People and animals.“

Participants in the discussion were (see the photos above, the first line, left to the right side): *Mrs Dusana Nikolic -Radosevic, program director & moderator of discussions;  *Prof. Dr. Tomislav Sedmak, psychiatrist; *Dr. Vladimir Dimitrijevic, assistant professor of the Faculty of Veterinary Medicine; *Mrs Natasha Vukmirovic president of People for Animals association; *Dusan Carnic (adoptive of Mila, female dog which, according to the participants of discussions, had all four paws expertly cut); *Dr. vet Sasha Stokic, with microphone (he operated Archi, mail dog to whom are cut off front and back paws on the left side of the body); *Vladimir Terzin, Dr. vet & Assistant of City Secretary for communal and Housing Services (in the audience, see the photo below); *Mrs. Milica Rankovic, president of Phoenix, association for animal protection and development of civic awareness (in the audience, see the photo below) ect.

The second theme of discussion was about 4 October, World animal protection day (Mrs. Milica Rankovic, president of Phoenix association talked about that) . 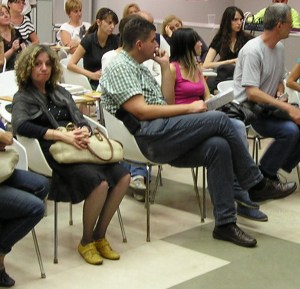 Discussion was continued about 2,5 hours. We talked about punishment of animal abusers, psyhological profile of abusers, our exscperiences, conditions under which animals need to live, about the importance of media in shaping attitudes towards animals, how is important attitude of adults towards to animals and their influence on children ect.

The second discussion about protection animals will be on 8 November 2011 at the same place and some time ( „The strategy of solving the problem of abandoned dogs and cats“).

More information you could see in serbian at https://tatjanamb.wordpress.com/2011/09/29/odrzana-tribina-nasilje-nad-zivotinjama-held-a-public-lecturing-violence-on-animals/ .

3 Responses to Held a public lecturing “ Violence on animals“